This is my poster for my phonetics project for which I posted a previous blog. I submitted my 20 page paper and have(hopefully) graduated.

https://russianiac.wordpress.com/2008/12/05/native-and-non-native-accent-in-russian/
I asked the question can learners of Russian as a second language (L2) identify native and non-native accent in Russian.

I had 9 speakers: 1 was native Russian, 3 were American, 1 was Polish, 3 were Armenian, and 1 Mongolian. They recorded the following sentence:

I had 24 Listeners: 8 native Russians and 16 students who were studying Russian at the University.
I asked them to identify the speaker as either ‘native’  or non-native.  I defined ‘native’ as being one who grew up speaking Russian in the home with parents. 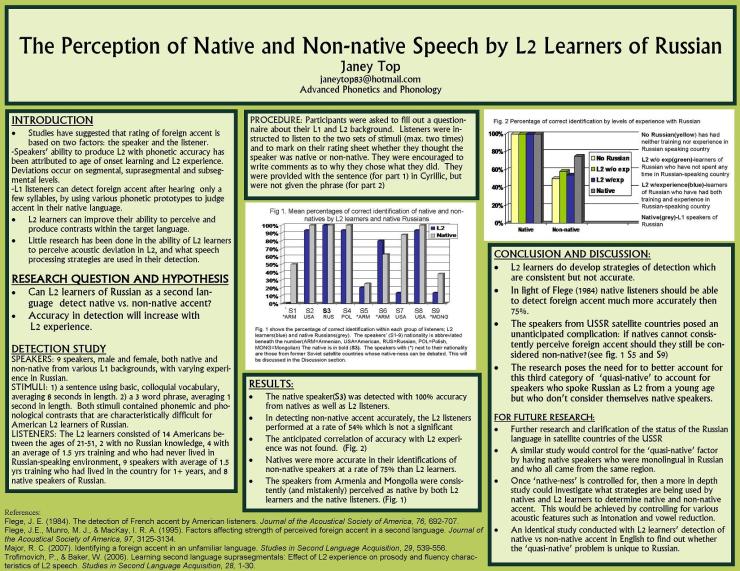 So my study found that L2 Learners of Russian can identify foreign accent, but that identifying it in speakers from USSR satellite countries was problematic. The fact that even the Native listeners had a hard time saying whether these speakers were native or non-native suggests that there is some serious ambiguity surrounding the term ‘native speaker’ in the case of Russian.
Essentially what I proposed in my paper was that the terms ‘native’ and ‘non-native’ are insufficient in Russian. Because certain speakers (the Armenians) were considered by native listeners to
a) have no accent, were native
b) have an accent–not-native
c) have an non-native accent, but were still considered native
Strange phenomenon in light of all the previous research that has been done on foreign accent detection.
The Armenians and the Mongolian speaker fooled both the American learners of Russian(L2) and the native listeners.

I would love to know if anyone has information about the status of the Russian language during USSR.  All of my Armenian speakers considered Russian to be their second language…Many Russian listeners identified them as having a Caucausian accent, but still called them native…why is this?

To listen to the samples you can go to my previous post:

What does an Armenian accent sound like? Аканье, оканье–в чем состоится?

Thanks to those who helped with this project!  I’m very happy to have it over with.  I hope you find it interesting.